If you haven’t heard already, Erin Andrews has been battling a civil suit against her peeping tom, 51-year-old Michael David Barrett, who video taped her nude inside of a hotel room back in 2008.

It was a big win for both Andrews but also for those that have faced any sort of sexual assault. When the hotel was supposed to be protecting her privacy, they failed, allowing a creep to have access to her room number so that he could set up shop next door, film her and then publish it on the internet for the whole world to see. Talk about a wake-up call. 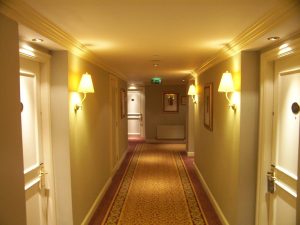 According to prosecutors, Bennett is believed to have filmed 16 other women against their knowledge, including other female sports reporters and TV personalities.

Andrews was awarded $55 million for her case. Barrett is required to pay 51% of the award while Windsor Capital Group and West End Hotel Partners are required to pay the other 49%.

So, what can the hotel industry do in order to prevent things like this from happening again?

Don’t give out the names and room numbers of your guests. It’s that simple.

It’s a matter of privacy. You should not be allowed to distribute the names of those that are currently staying in your hotel, especially disclose their room number. Rules are set in place to protect guest’s safety, security and privacy. They should be followed.

According to the Los Angeles Times, hotel guidelines on privacy are as follows:

“As a general rule, front desk staff are never supposed to say a guest’s room number out loud. Instead, they write the number down on a piece of paper or a cardboard packet containing the room keys. Hotels also are not supposed to honor requests to stay next to or near or guests, but as the Andrews case shows, not all employees get the message. Hotel workers are instructed to honor security but also must try to make guests’ stays enjoyable and to grant most reasonable requests.”

The safety of our hotels is something that most do not second guess. We trust and believe that the hospitality industry is following the correct protocols in order to keep their guests safe and secure.

With the ruling, many hope that the hotel industry gets their wake-up call: that it’s time to take premises liability – and especially their guest’s privacy and safety – seriously.

Previous Post
3 Reasons Why You Need a Technology Upgrade
Next Post
Chicago Bike Lanes: On the Right Path?